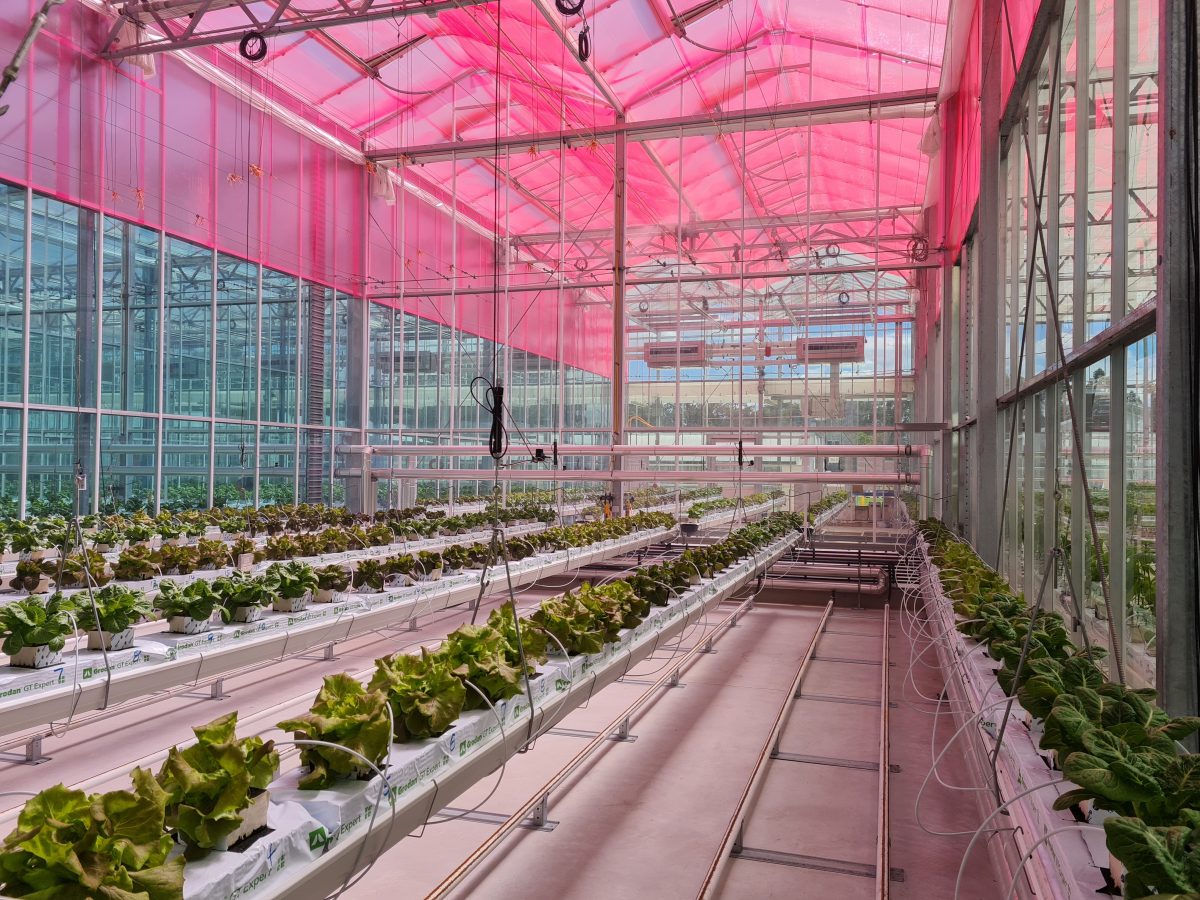 The aim is to ascertain how each technology impacts on the growth and productivity of lettuce crops grown in a state-of-the art controlled-environment glasshouse.

The project is scheduled for completion on 1 May 2022.

Smart Glass ULR-80, designed by Australian scientists for use in commercial greenhouses, blocks much of the solar radiation that contributes to heat gain, while transmitting most of the wavelengths required by plants for photosynthesis and growth.

However, as it changes light intensity and spectral quality, SG may adversely affect plant growth and development, photosynthesis, biomass partitioning, yield and quality.

“In the eggplant trials, we found that SG increases energy and resource-use efficiency while minimally affecting fruit quality, but there was a significant reduction in photosynthesis and eggplant yield,” Distinguished Professor Tissue says. “Capsicum production was less negatively affected by SG, perhaps due to smaller fruit size.”

“To minimise negative impacts, we concluded, Smart Glass should be re-engineered to increase penetration of UV and photosynthetically active radiation (PAR) but continue to block long-wave radiation contributing to heat gain,” he says.

LLEAF is an ag-tech start-up that has developed a patented luminescent technology in collaboration with UNSW. LLEAF films have been shown in previous trials to deliver significant increases in production and in energy and water-use efficiency.

“Our collaboration with the CRC and WSU is allowing us to test LLEAF in a state-of-the-art glasshouse to further validate our technology,” Dr Soeriyadi says.

“This will allow us to approach growers with our products and, potentially, develop further product lines.”

The team is deploying the glasshouse’s sophisticated sensor systems to compare the impacts of SG and LLEAF films on vegetative growth and other physiological processes in the lettuces with those of the control glass, and to yield a data-based assessment metric for evaluation. They’ll also identify positive and negative impacts of both light-shifting films on crop yield and nutritional value.

The team will use the resulting data to determine optimum levels of light quantity and quality needed to generate energy, water and nutrient-savings while maintaining or increasing crop nutritional value.

The findings will support the commercialisation and adoption of both prototype products by the protected cropping industry.

“Ultimately, our objective is to reduce resource use (energy, water and nutrients) and increase crop productivity and quality in a sustainable protected cropping environment,” says Distinguished Professor Tissue.

The project is a collaboration between CRC partners Western Sydney University, Horticulture Innovation Australia, LLEAF Pty Ltd and Rjik Zwaan. It is an extension of an existing Hort Innovation-funded project.