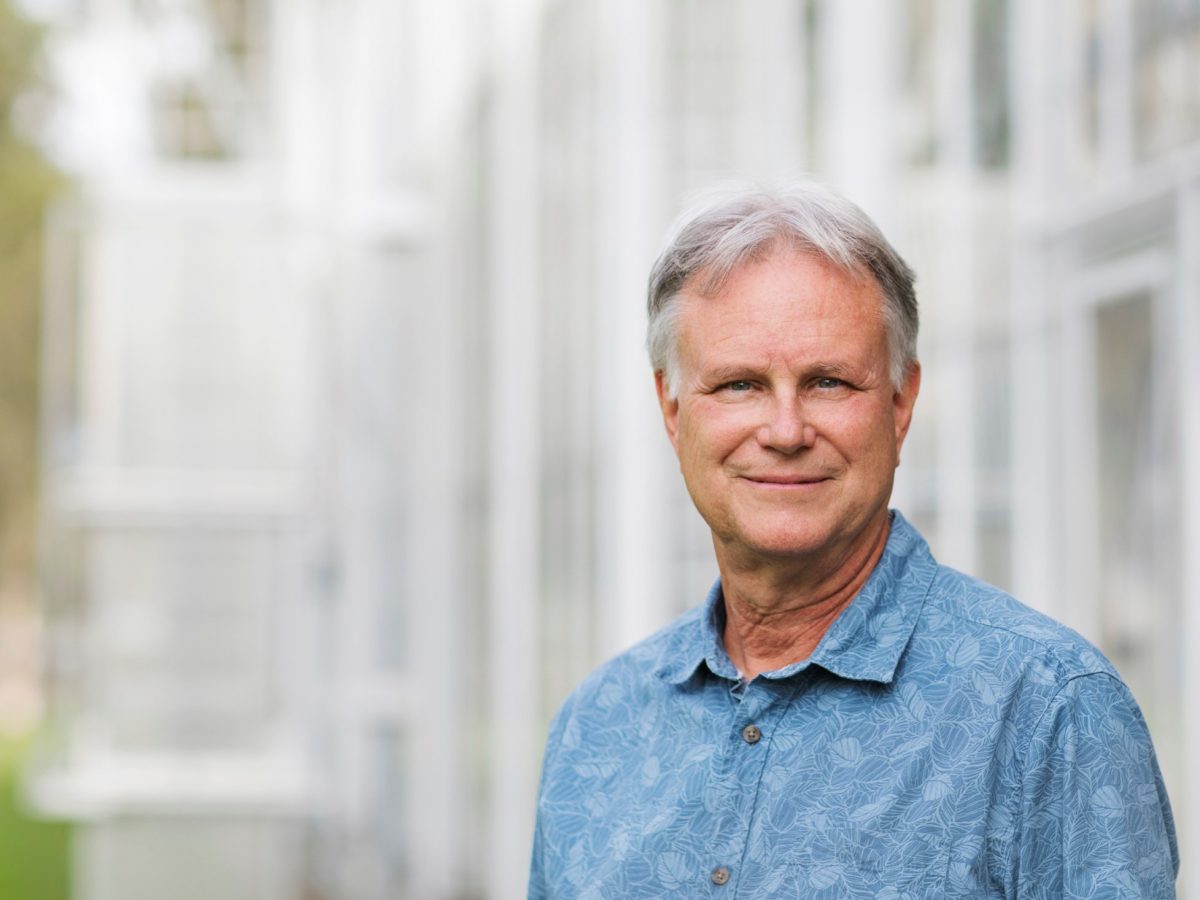 At WSU, he is the Scientific Research Director for National Vegetable Protected Cropping Centre (NVPCC), Discipline Leader for Agriculture and Food Science, and Research Leader for Rainout Shelters at Hawkesbury Forest Experiment. Dist. Professor Tissue is also the Research Lead for Program 2 – Advanced Protected cropping systems – within the Future Food Systems CRC, a member of the Scientific Advisory Board for the Royal Botanic Garden and Trust (Sydney) and serves as editor or part of the editorial board of five peer-reviewed journals.

Since relocating from the United States of America in 2007, he has been the recipient of several grants from the prestigious Australian Research Council (ARC).

And Dist. Prof. Tissue’s work extends beyond academia into the real world. He has a long history of constructive collaboration with the agriculture and forestry industries in the United States and Australia, providing industry-relevant research and innovations and linking with end-user groups for immediate uptake.

He is an integral part of the leadership team at the Global Centre for Land-based Innovation (GCLBI), where he heads up the Industry and Training Program, ensuring regular contact with end-users through industry workshops, symposia and opportunities for international training and exchange.

Early career: from Canada to Southern California to Alaska

On graduating from McGill University (Montreal) with a BSc, an experience-hungry Tissue travelled south, obtaining his MSc from San Diego State University in Southern California and a PhD from the University of California, Los Angeles (UCLA).

“My interest in plant physiology and ecology began as an undergraduate student at McGill University in Montreal, where I took some fascinating and challenging courses, which forced me to think creatively and synthetically,” he explains. “Thereafter, I travelled across the USA with my girlfriend – now wife – to work for an engineering and environmental consulting business in California and, eventually, to enter graduate school at San Diego State University.

“There, I was offered the opportunity of a lifetime to study the impact of elevated CO2 and temperature on arctic tundra vegetation on the North Slope of Alaska, where we set up the world’s first climate-change study in natural vegetation.

“Driving 5,000 km from southern California to the top end of Alaska in an old bus filled with scientific equipment, living in a tent for four months in the tundra inhabited by caribou and bears, swimming in an arctic lake, and working in the field on a novel (at the time) environmental issue, convinced me that this was a great way to make a living.”

Post-doctoral work: from The Smithsonian, Panama to Texas Tech University

Moving further south, Dr Tissue took up a position as a post-doctoral scientist at the Smithsonian Tropical Research Institute in Panama, where he focused on the response of tropical shrubs to experimental watering during the dry season. Back in the US, he did some post-doctoral work at Duke University, studying tree responses to elevated CO2 from biochemical, physiological and ecological perspectives.

From there, he joined the faculty of Texas Tech University, where he stayed until the move to Australia and the HIE.

“After working in Alaska, I spent time working in the deserts of America, tropical forests in Panama, temperate forests in the USA and New Zealand, and cotton and peanut fields in Texas, while promoting from PhD student to Professor,” Dist. Prof. Tissue recalls.

In the US, he led large-scale projects for the cotton and peanut sectors funded by the US Departments of Agriculture (USDA) and Energy (USDE), and worked for several years with NASA on crops to use in closed systems in the Mission to Mars program.

The Tissues’ decision to move from the Northern to the Southern Hemisphere had a 17-year gestation period. “My wife and I had travelled for three months in 1990 throughout Australia in an old Ford Cortina, visiting all states except Western Australia and Tasmania,” Tissue recalls.

Fourteen years later, in 2004, he took a sabbatical in New Zealand and had the opportunity to visit Sydney with his wife and two daughters. “We loved the city,” he says. “When job opportunities became available in Australia, I applied, and was offered a position at Western Sydney University in 2007.”

The timing of the move was serendipitous. “A mid-career move can be invigorating and exciting – working in a new place on new ideas,” says Tissue. “We came at the right time to take advantage of the opportunity to receive significant funding from the government to build a very large and comprehensive climate-change facility which addresses the impact of elevated CO2, temperature, heatwaves, drought and floods on trees, grasslands and crops.

“More recently, in 2017, with university and HIA funding, we built an 1,800m2 glasshouse facility – part of the National Vegetable Protected Cropping Centre – that is a core facility for the CRC. The state-of-the-art facility provides us with an ideal facility to test the impacts of different film coverings to reduce energy, water and nutrient use, while maintaining high yield of vegetables.”

He’s explored the responses of trees and cotton crops to climate change – specifically, elevated CO2 and temperature – and to extreme climate events such as drought, floods and heatwaves.

He’s helmed precipitation-manipulation trials on pasture (DRI-GRASS); grassland precipitation reduction experiments (DroughtNet); and studies of pastures and climate extremes (PACE), in which he and his team investigated the impacts of heat and precipitation.

And all this work has had real-world impact: helping Australia’s cotton, forestry and dairy industries develop climate-resilient cultivars and Eucalypt genotypes, and developing tools for managing crops and plantations in a changing environment.

More recently, at the NVPCC, Dist. Prof. Tissue has been exploring new technologies for improving horticultural crop productivity, in the field and in indoor cropping facilities – the climate-protected food production systems of the future.

Several projects backed by Horticulture Innovation Australia (HIA) grants, with an array of industry partners including Syngenta, Greenworks and Apex Industries, include a five-year ongoing project developing the National Centre for Innovation in Protected Cropping of Vegetables, due for completion in 2022; exploring the use of stingless bees as effective ‘managed pollinators’ for Australian horticulture; and, most recently, trialling innovative glass and photovoltaic technologies in protected cropping.

In his work with the CRC, Dist. Prof. Tissue is overseeing several industry-led collaborative projects, based at the NVPCC’s new, high-tech indoor-cropping facility and at Costa Group’s new tomato-growing glasshouse complex near Guyra, in northern New South Wales.

A recent CRC project led by Dist. Prof. Tissue at WSU, with CRC industry partners Horticulture Innovation Australia, LLEAF Pty Ltd and Rijk Zwaan, is comparing the performance of two prototype light-diffusing films – LLEAF-Red and Smart Glass ULR-80 – with that of conventional glass. The project team are growing three varieties of lettuce in trial plots located in the experimental glasshouse at NVPCC. Environmental inputs such as temperature, ventilation, soil and atmospheric moisture levels and CO2 are under precise control.

“Taking chances and exploring new ideas, places and things is a passion in life and in science. I am very happy that I took the road less travelled, and highly recommend it to others.”

What’s still to be explored? As a parent, Tissue can’t help but be concerned about climate change – and driven to find ways to mitigate its harmful impacts.

“It is essential that we fully address climate change, which is the most pressing issue for humanity from an economic, environmental and social perspective,” he stresses. “The politicisation and nationalism surrounding the issue must be eliminated so that we can focus on solving the problem.

“One core problem with climate change is food security, which is threatened by extreme climate events – heatwaves, droughts, floods and fires – exacerbated by a rapidly changing climate. Australia has encountered all of these extreme events at levels rarely seen in the history of the country, yet we do not see sufficient movement to mitigate the problem.

Dist. Prof. Tissue’s enthusiasm for the CRC is fuelled by the recognition that it shares his concern for developing sustainable food systems for the future.

“At the CRC, we plan to safeguard food security to some degree by growing food near urban centres in a sustainable fashion and getting it to market quickly,” he says.

When not constrained by his teaching commitments, research schedule or the current pandemic, Dist. Prof. Tissue broadens his geographic and cultural horizons.

“I am most passionate about travel to all corners of the globe,” he says. “From the age of 14, when I took a bus by myself from Washington DC to Sacramento, California, to arriving by train without a word of French to start university in Montreal, to travelling around the world to Central and South America, Polynesia, Easter Island, Australia, New Zealand, Asia, Africa and Europe for two years with my wife (no kids), after my PhD and before my post-doc, I’ve found travel to be the best way to connect with people and cultures.

“We took our kids to our field sites whenever possible, including forests in New York and New Zealand, Big Bend National Park along the Rio Grande River, and into Mexico.

“Our sense of adventure has been passed along to our daughters, which will serve them well in an increasingly connected world.”