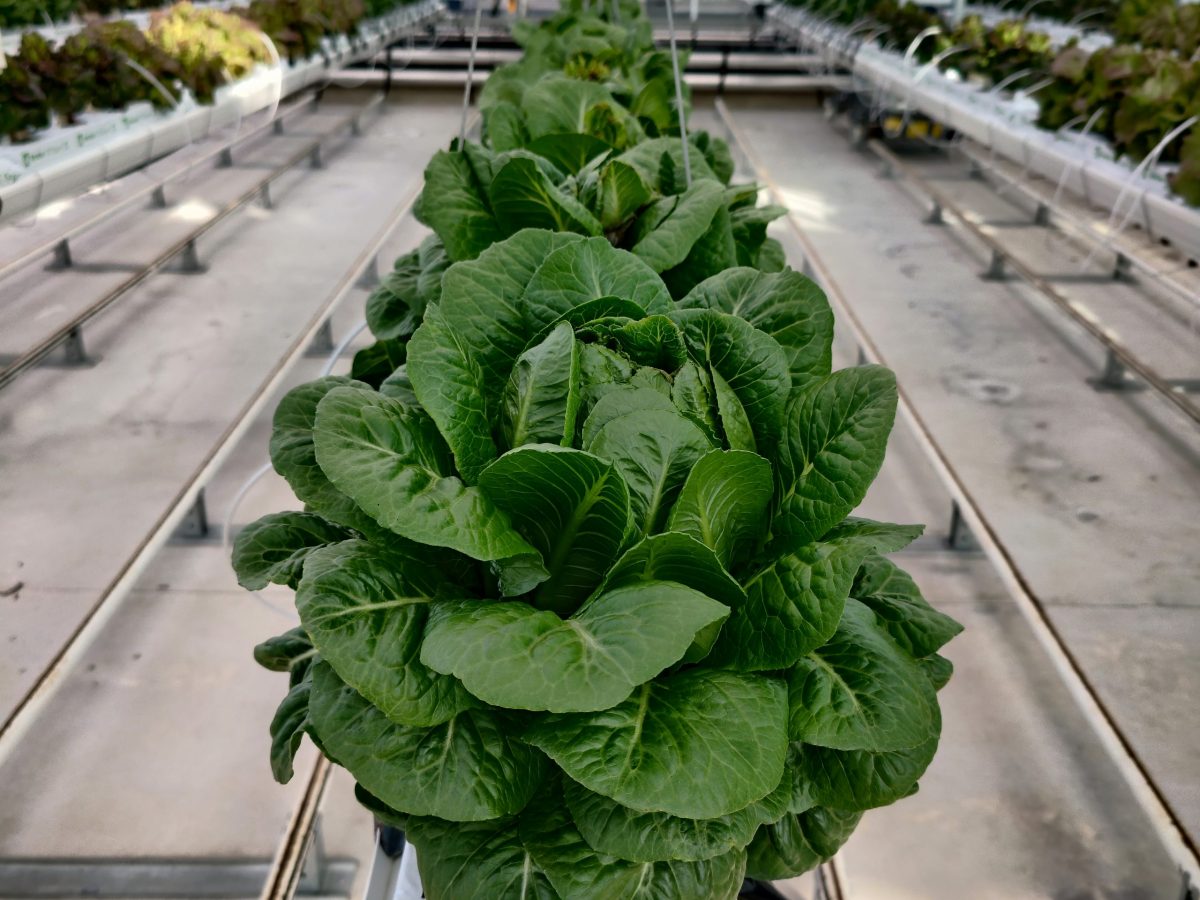 The project team found that plant growth, photosynthesis, yield and quality all varied in response to each of the prototype cover materials, with impacts varying according to cultivar and growth season.

Covering trial crops in LLEAF-Red did not affect the fresh weight of resulting lettuces appreciably in early autumn but later in the season, under lower light conditions, it resulted in heavier lettuces than those produced under either SG ULR-80 or hazed greenhouse glass (the control), with the significance of the difference varying according to cultivar.

The project team concluded that with some modifications, both prototype film could become viable, cost-effective solutions for commercial growers looking to improve greenhouse energy efficiency and crop yield.

‘Potential energy-saving SG reduced [crop yield] but LLEAF increased the yield,’ the final project report states. ‘The energy-saving ability of SG could be combined with yield-increasing potential of LLEAF.’

A follow-up CRC project is in the pipeline.

Previous trials of Smart Glass ULR-80 showed that it blocks much of the solar radiation that contributes to heat gain while transmitting most wavelengths required by plants for photosynthesis and growth. However, SG also reduces light intensity in some important wavelengths; hence it can adversely affect plant growth and development, photosynthesis, biomass partitioning, yield and quality.

In an earlier project with industry body Hort Innovation, WSU scientists found that deploying Smart Glass ULR-80 with glasshouse-grown eggplant and capsicum crops increased energy- and resource-use efficiency with minimal negative impact on fruit quality; however, its use resulted in significant reductions in photosynthesis, and in eggplant (but not capsicum planted in low light season) yield. The researchers concluded that SG ULR-80 should be re-engineered to increase penetration of ultraviolet (UV) and PAR but continue to block the long-wave radiation that contributes to heat gain. The researchers also recommended testing SG ULR-80 on non-fruiting crops such as leafy greens – hence this project.

The two prototype films were installed over trial bays growing leafy green and climbing-vine crops within the high-tech controlled-environment glasshouse at Western Sydney University’s Hawkesbury Institute for the Environment (HIE).

Trials were conducted under several different light conditions (summer, early and late autumn) to understand the impact of seasonal light variation under SG and LLEAF on plant growth and productivity.

Plant growth, photosynthesis, yield and quality all varied in response to SG-ULR-80 and LLEAF-Red, with impacts varying according to the cultivar and growth season.

“Only SG significantly affected colour parameters in all cultivars,” Dr Chavan says. Vegetation was generally more reddish in lettuces grown under SG ULR-80, while LLEAF-Red did not appear to affect vegetation colour.

Over summer, covering the crop with SG ULR-80 reduced fresh weight in both butterhead and green cos cultivars by 10 to 15%, but SG covering had little impact on their weight in late autumn, Dr Chavan says.

Covering trial crops in LLEAF-Red did not affect fresh lettuce weight much in early autumn but under the lower light conditions of late autumn, it resulted in heavier lettuces than those produced under either SG ULR-80 or the control crop under hazed greenhouse glass.

The significance of the difference varied according to cultivar. Fresh weight of both butterhead and green cos lettuces grown under LLEAF-Red in late autumn was significantly higher than that of the same cultivars grown under under conventional greenhouse glass or SG ULR-80.

“LLEAF-Red did not affect the plant fresh weight during high light conditions of early autumn, but increased plant fresh in weight by [a significant] 27% in the butterhead lettuce and by 14% in green cos lettuce during late autumn,” Dr Chavan explains.

The fresh weight of red cos grown under LLEAF-Red in the same season, while not significantly greater than the red cos controls, also tended in that direction.

“Red cos plant fresh weight did not show significant changes in response to either SG ULR-80 or LLEAF-Red, but there was an increasing trend for LLEAF-Red,” Dr Chavin notes.

LLEAF-Red film proved more conducive to growth in greenhouse lettuce crops but, according to the project team, further testing and modification are needed before it will be viable for commercial horticulture.

‘LLEAF may be useful for lettuce growth, but more chemical and nutritional analyses are required to make that decision,’ the team’s final quarterly project report states. ‘LLEAF must also be tested in climbing vine crops (e.g., cucumber and capsicum) to assess general use in horticulture.’

Already, the project has spawned new trials of the prototype films with other greenhouse-grown crops.

A new prototype film for growers

The lettuce and cucumber trials at WSU showed that Smart Glass ULR-80 ‘will not be a viable option for growers, given the yield penalty due to reduction in useful light’, the project team stated in its final report – which also acknowledges that ‘this, potentially, could be offset by energy savings’.

Based on results from this project, a recently funded CRC project involving Hort Innovation will look to develop a new SG film, better suited to commercial indoor horticulture. Further research on LLEAF films will also be undertaken as part of the project – stay tuned for ‘LLEAF-Purple’.

“Ultimately, our objective is to reduce resource use – energy, water and nutrients – and increase crop productivity and quality in a sustainable protected-cropping environment,” project lead Distinguished Professor David Tissue says.

The findings of the just-completed ‘Smart Glass-’ project will inform the fine-tuning of both prototype films prior to commercial release and adoption.

Down the line, other CRC partners, such as industry leaders Perfection Fresh and Costa Group, will benefit from access to improved technology backed by robust performance data.