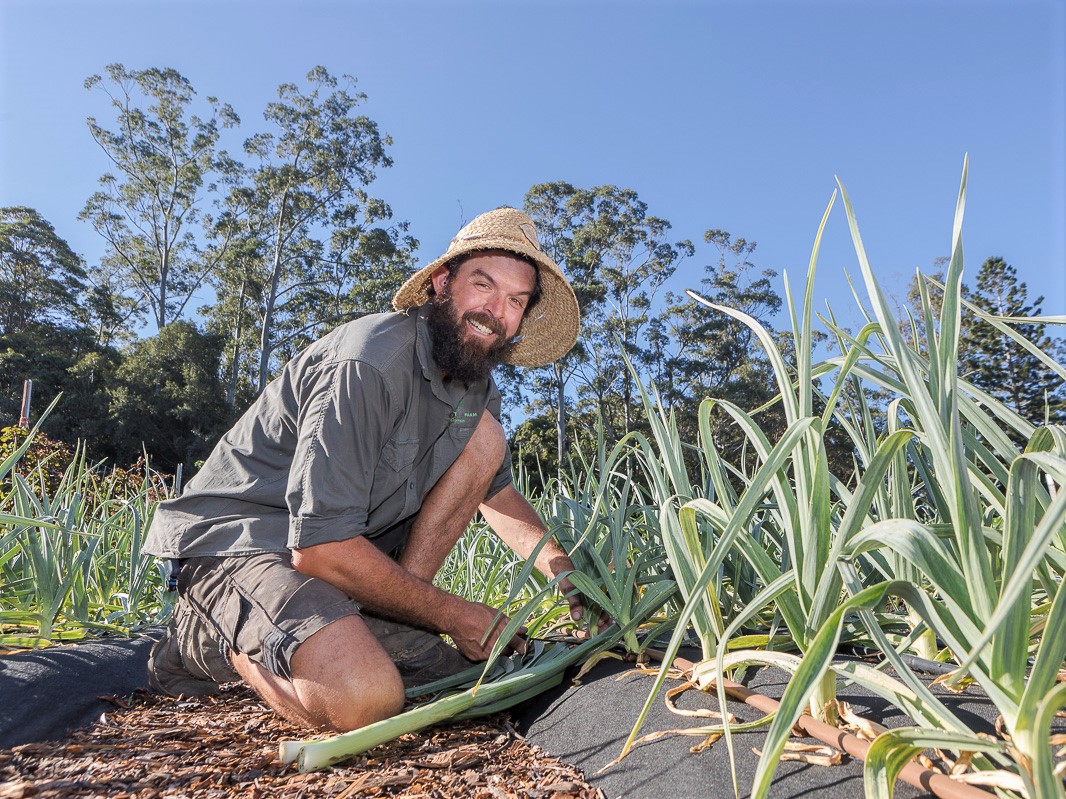 A new CRC project involving Coffs Harbour City Council and researchers at Queensland University of Technology (QUT) will construct a detailed overview of food production in the Coffs region of NSW and explore prospects for its growth through expanding output capacity, value-adding and the informed deployment of technology. The project’s findings will underpin the creation of a smart, sustainable food hub and more streamlined distribution channels in the region.

The Coffs Harbour local government area, encompassing 1,174 square kilometres including 78.8 kilometres of the New South Wales Mid North Coast, is a subtropical zone with ample arable land and a mix of cool and warm ocean temperatures. The region has potential to become a productive and profitable ‘food bowl’ for the NSW North Coast region and beyond.

Right now, the agrifood sector accounts for 16.7% of employment in the Coffs Harbour LGA, adds more than $744 million annually to local coffers and is the largest producer of exports in the region.

Historically, bananas have been a mainstay of Coffs’ agriculture sector, but other foods now contribute to its agrifood economy – notably, blueberries, which comprise around 80 per cent of all regional produce and 55 per cent of the nation’s total blueberrry production. Coffs Harbour-region farmers also produce potatoes, ginger, garlic, turmeric, milk, seafood and livestock as well as cucumbers, tomatoes, micro-greens, avocadoes, macadamia nuts and native ‘bush foods’.

“Much of the produce farmed and created on the Coffs Coast provides rich, healthy food staples for locals and people outside the region.”

While Coffs’ agrifood sector is one of the mainstays of the region, it could be further developed and improved.

Currently, a substantial percentage of the food produced in the region is sold unprocessed, sometimes into lower-value domestic markets, or worse, lost in the journey from farm to market. More than half of what the region produces travels considerable distances to reach end users via supply chains that, modernised and streamlined, could be faster, safer and more transparent.

Meanwhile, other geographically suitable and potentially high-value crops are grown only in small quantities locally, or not at all. And right now, there’s limited opportunity to process fresh produce, within the Coffs Harbour LGA or nearby.

The opportunity: high-worth crops, value-adding and other potential growth areas

The Coffs food ecosystem project seeks to change all this for the better. And the first step in doing so is to gain a thorough understanding of the region’s current food production ecosystem and prospects for its evolution.

“There is growing demand to strengthen value-add production of local produce and explore new growth opportunities which will deliver greater strength to the agricultural economy,” says Barden.

“The Future Food Systems CRC has given the Coffs Harbour region an opportunity to explore capacity of production within the region; new produce opportunities; and the development of value-add products – particularly around food wastage and the health benefits of blueberries, along with highlighting the importance of regional areas in food production.”

The research task: paving the way to a brighter food-industry future for Coffs region

Coffs Harbour City Council (CHCC), along with the region’s food growers and producers, suppliers and retailers, has committed time and resources to understanding opportunities for growth in the local food sector.

The team will pay particular attention to what is needed to expand the region’s overall output capacity, and the potential to ‘add value’ to foods already produced locally.

1/ a background study into the context and history of Coffs Harbour region’s agrifood sector, yielding a comprehensive overview of the region’s producers, produce and trends

2/ a quantitative study, designed to acquire a more refined understanding of the food ecosystem giving rise to a case study findings report that includes:

3/ a qualitative study, to understand the current and potential future state of the Coffs Harbour region food-production ecosystem as well as barriers to and promoters of this transition.  The resulting report will include a generic food-ecosystem map of the region detailing ecosystem actors, their connections, the flow of resources and ‘barrier’ locations, along with identified strategies available to the ecosystem.

4/ a stakeholder workshop, to present the findings from the project’s three analytic studies and start a conversation around next steps for the Coffs Harbour food-production ecosystem.

Outcomes: A smart, streamlined, sustainable food-industry ecosystem for Coffs region and beyond

The findings of this four-stage project will provide food-industry planners with a clearer perspective on the potential future state of the Coffs Harbour food ecosystem, highlighting anticipated barriers and promoters of the transition from the current food ecosystem to one that is more productive, profitable and sustainable; and will benefit a broad range of stakeholders with vested interests in the Coffs Harbour ecosystem.

It is hoped that learnings from the project will be used to plan and develop beneficial economic, health, environmental and social outcomes for the Coffs Harbour community based on the growth, manufacture and distribution of food’.

Specifically, the research findings will inform:

“Coffs Harbour City Council is excited to be part of the Future Food Systems CRC and to commence their first research project, which will help inform future direction for the local agricultural industry, exploring capability of the industry to drive new ventures and innovation,” says Barden.

“The insights from this first project will inform future potential for the region in agritourism, food production, and regional, national and international export.”

Many of the broader insights gained via this scoping study will also be translatable to regional food ecosystems nationwide that are endeavouring to transition to a more value-add-centric model.

The project, part of the CRC’s Research Program 1 – the development of specialised food-industry clusters – commenced on 1 June 2020 and is due for completion by 31 May 2021. Coffs Harbour City Council is partially funding the project and will provide on-the-ground support, local knowledge and regional data. Further funding is provided by the CRC through its federal government grant.