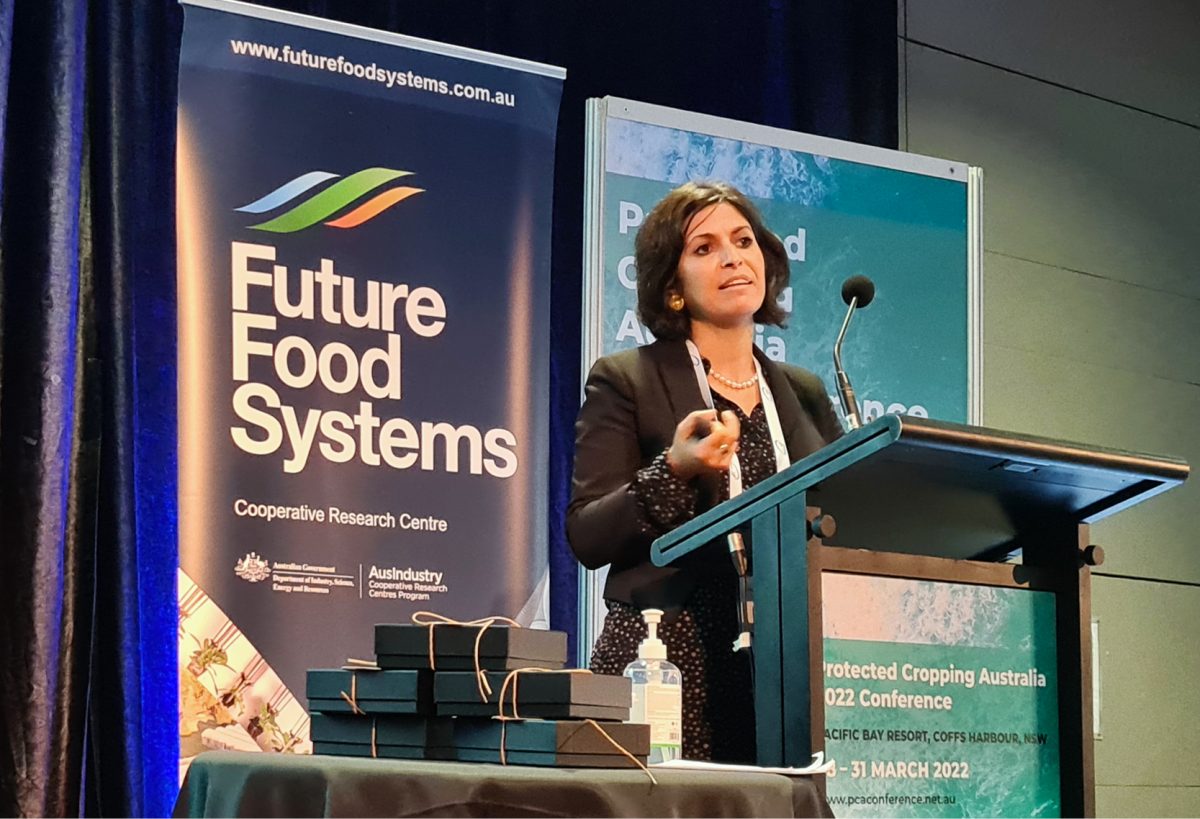 The weather was bleak but camaraderie was high among those attending the PCA’s biannual conference in Coffs. Day 1’s grower workshops were well attended, and while extreme weather forced the cancellation of Day 4’s farm tours, many came to the plenary sessions and presentations held across three conference rooms.

And though flooding rains prevented it from being ‘under the stars’ as billed, the colour-themed, multicultural-cuisine Gala Dinner and industry awards were a resounding success.

PCA Chair Matt Plunkett addressed the crowd of exhibitors and delegates who gathered in the Exhibition marquee, despite the downpour, for the opening-night Welcome Drinks.

“We are delighted to be in a regional area where there is significant growth and expansion in the industry,” Plunkett told the assemblage. “We have industry members from fertiliser companies, climate control companies and technical areas such as lighting and irrigation support products.

“The industry is estimated to be growing around 5-7 per cent in Australia. That’s phenomenal growth across berries and other fruit and vegetables, the GreenLife industries and amenity horticulture. Also some of those emerging tree crops including avocados, cherries and mangoes. There is a lot of interest in the sector, including our Medicinal Cannabis stream.”

“We are very proud to support our students and have a whole session looking at their work,” Plunkett said. “It is a pleasure and honour to lead an industry so passionate about the growth and development, and sustainability of our industry.

“In addition to our students there is a lot more innovation across the sector and we have a 2030 strategy, and the PCA has advocated very strongly to the Australian Government and Hort Innovation around targeted R&D. One of those is a significant mapping project – so in 18 months’ time, we will have a verifiable map of the size of protected cropping industry. This is exciting, given the amount of growth in some of the key sectors,” Plunkett said.

CRC projects in the spotlight

The CRC was well represented, with our projects and people featuring in 15 conference sessions.

A large Western Sydney University contingent that included Professors Zhonghua Chen, Priti Krishna and Michelle Mak along with several postgrad and PhD students gave more than a dozen presentations, including a number relating to CRC projects on retrofitted agricultural films, cooling glasshouses in warm climates, exploring the rhizobiomes of hydroponically grown tomatoes, and optimising the growth and nutritional makeup of blueberries grown undercover.

UNE’s Professor Andrew Robson and Craig Shephard, who lead the major PCA-Hort Innovation-UNE-CRC project mapping Australia’s protected cropping facilities, described how they’re creating a detailed overview of the industry that will determine the true extent of the sector and help it manage everything from natural disasters to and disease outbreaks.

Three of the five presenters in the ‘Student Showcase’, Terry Lin, Gareema Pandey and  were WSU students engaged on CRC projects. Terry Lin (‘Greenhouse fertigation’ project) – who also gave a separate presentation at the conference – and Gareema Pandey (‘Blueberry nutrition optimisation’ project), received second and third prizes for their student presentations in the Conference awards.

We congratulate all our students for their engaging and informative talks and for doing such a great job representing their universities, industry partners and the CRC at the event.