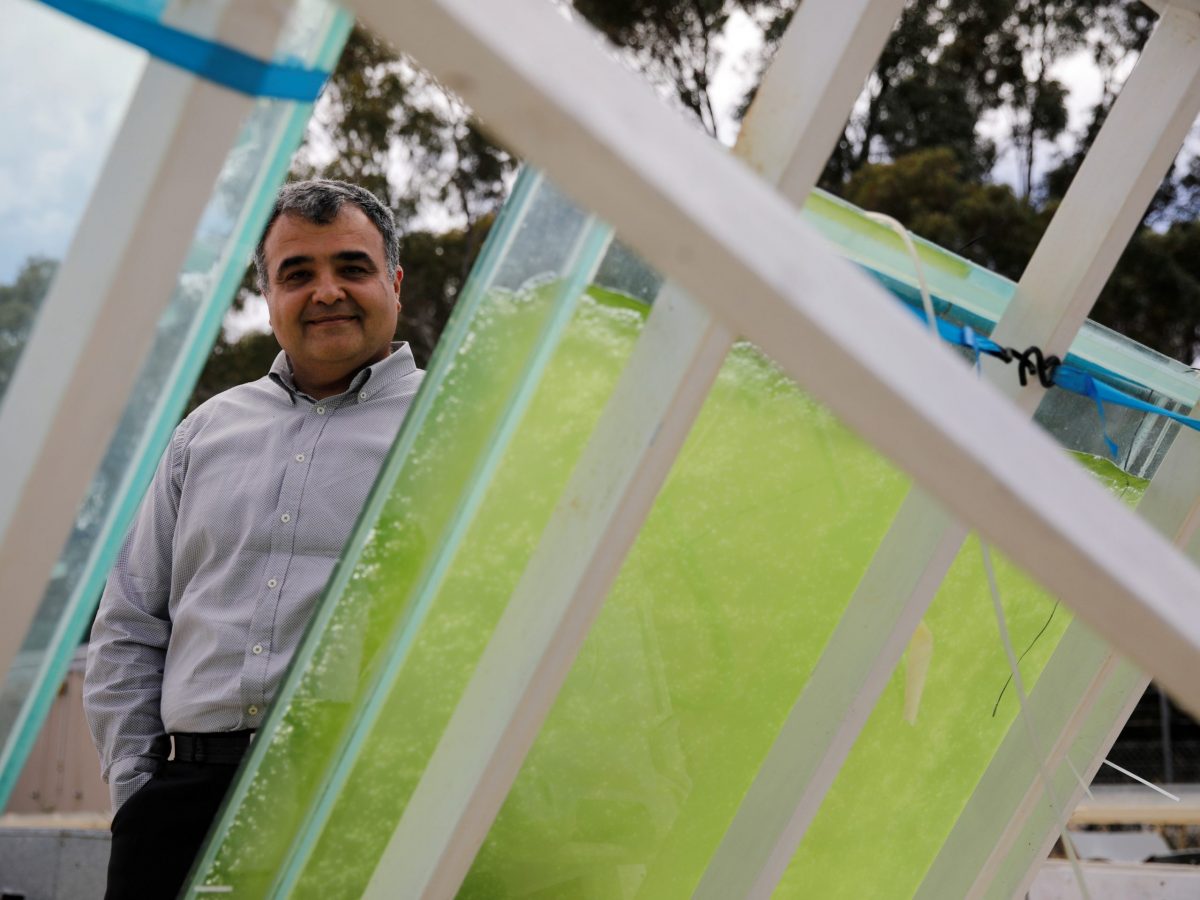 New discoveries pave the way for an algal boom

As Western Australia endeavours to diversify its mining dominated economy, researchers at Murdoch University have discovered incredible opportunities in algae.

“And with light by far the most important factor in growing any algae, being situated in one of world’s sunniest states presents an incredible scientific and economic opportunity for Western Australia.”

From Bruce Rock to Broome, the sun, temperature and saline water is available to develop an industry that can create jobs for local communities, diversify revenue for the state economy and deliver food for the world.

“In the Wheatbelt region alone, there is almost unlimited opportunity to help farmers use their unused lands and underground water to produce high value products from saline microalgae.”

One of the major innovations that Dr Moheimani’s team has developed is a system for treating wastewater from farms. The two-stage system uses algae to treat animal effluents and return it to clean water.

First, a process of anaerobic digestion breaks down biodegradable material in the waste, which creates methane that can be used to power farm facilities.

After that, the anaerobic digestate – which is full of inorganic nitrogen and phosphorous – is fed into raceway ponds seeded with algae, which removes the non-biodegradable material as the algae consumes it to grow.

Most importantly, the algal culture does not compete with food crop production for arable land and freshwater – this process can take place anywhere and runs on waste.” – Associate Professor Navid Moheimani

“The microalgal biomass contains up to 50% carbon, meaning it also removes significant carbon from the atmosphere in the process.”

The resultant water is clean enough for irrigation and, if further processed, even drinking. The system also ensures that nitrogen and phosphorus aren’t released into water streams, which can cause major environmental issues such as harmful algal blooms and mass fish mortality.

The big upside for producers is in the algae itself, which can be harvested from the ponds and used on farm or sold as fertiliser and animal feed.

This process was developed as part of the Pork Cooperative Research Centre and the Wastes to Profits project which is supported by Meat & Livestock Australia through funding from the Australian Government Department of Agriculture, Water and the Environment as part of its Rural R&D for Profit program and the partners.

The process can also be applied to domestic wastewater, which is attractive for regional communities since the technology is relatively simple and the ponds require very low energy compared to the standard of effluent treatment.

The applications of algae don’t stop at the farm gate. The Western Australian coast, rich in sunlight hours and easy access to saltwater, is the ideal environment for producing pigment, bio-oil used in manufacturing and potentially bioplastics, among other high-value products.

Western Australia already hosts the largest commercial microalgae production plant in the world which, together with a sister plant at Whyalla, South Australia, produces the bulk of the world’s supply of natural beta carotene.

This is the pigment that makes pumpkins and carrots orange and is used in food, nutraceuticals and pharmaceuticals and considered by some as ‘the superfood of superfoods’.

As consumers become increasingly health and food-impact conscious, the demand for natural pigments, vitamin supplements and sustainable foods continues to grow. This is the opportunity for algae

Its high growth rate and ability to produce food from the sun means protein yields are more than 100 times greater than animal-based proteins, including beef, eggs and dairy.

One of the most valuable and immediate opportunities Dr Moheimani sees is using algae to produce omega-3 – commonly referred to as fish oil – supplements.

“The current fish oil comes from capturing fish, which isn’t a sustainable process. Given the same products exist in some microalgae, it makes a lot of sense to grow the algae for these products rather than killing fish.”

Where to grow now

“The next step is partnering to deliver some of the processes we’ve developed on a large scale,” says Dr Moheimani.

“Treating the waste of a regional town, and in doing so making it a more energy efficient, environmentally friendly operation that creates local jobs, is a very exciting prospect.”

Beyond that, the opportunity is massive. The global market of microalgae products was estimated to be over a one billion US dollars for 2020, according to recent research.

This comprises a US$800 million market for colouring agents, US$300 million for antioxidant nutraceuticals, US$500 million for pharmaceuticals and US$30 million for cosmetics. We may soon see that delivering beta carotene to the world might be just the beginning of an algal boom for Western Australia.

Learn more about the research at the Centre for Water, Energy and Waste.