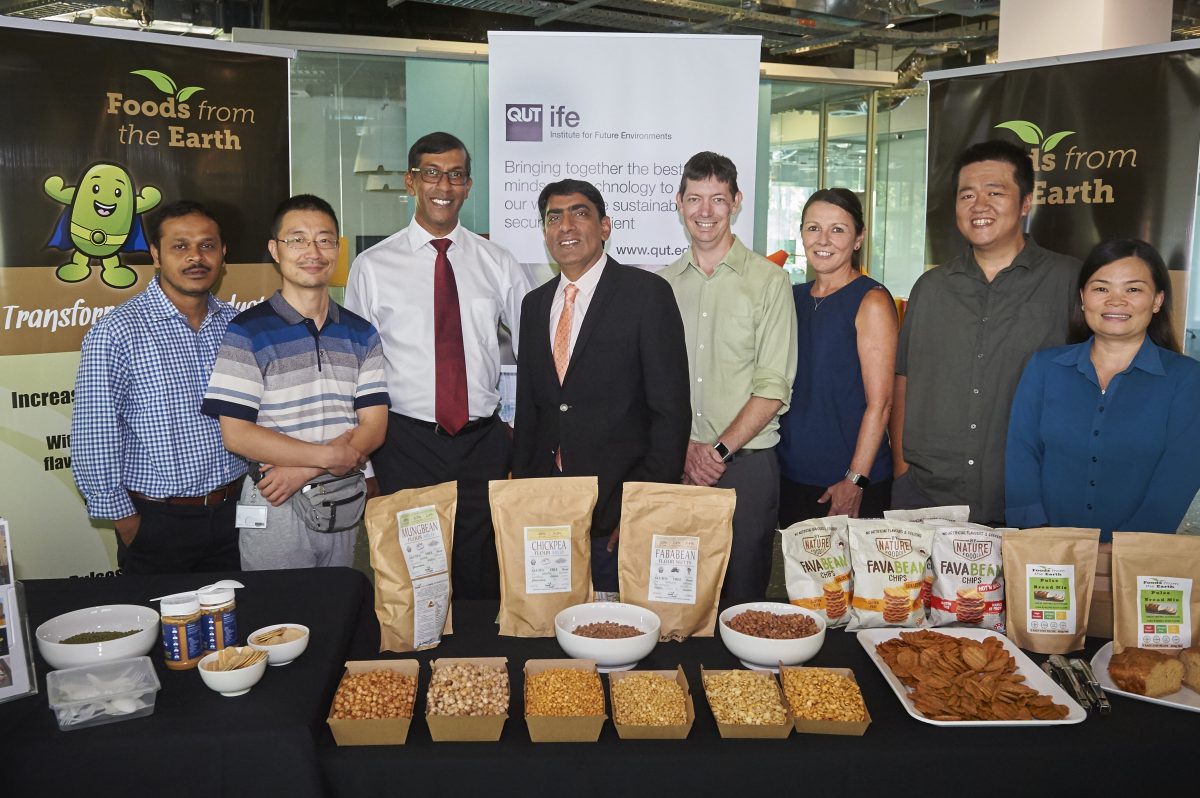 Putting pulse-rich products on the table

Innovative Brisbane-based company Austgrains is working with pulse-crop experts at Queensland University of Technology (QUT) and food scientists from universities across Australia to develop tasty pulse-based products with proven nutritional and prebiotic credentials. It is hoped the research will benefit consumers’ health as well as producers’ bottom lines.

With demand growing in the west for nut-free, gluten-free, low-allergen, low-GI foods and nutritious, sustainable plant proteins, you’d think pulse legumes (chickpeas, lentils, mung beans and the like) would be an obvious go-to.

Consumers in the Western world, however, have been slow to realise pulses’ broad-ranging health benefits.

In a multi-year project with Queensland Department of Agriculture and Food (QDAF) and industry partners including seed producer Austgrains, flour manufacturer Unicorn Specialty Flour (USF) and processor Foods from the Earth (FFE), a team of researchers at QUT’s Centre for Tropical Crops and Biocommodities (CTCB) led by Professor Sagadevan Mundree has been working to change that.

Employing science-based methods and drawing on Austgrains’ extensive seed bank, Mundree’s team has been able to identify those pulse varieties best suited for use as ingredients and, in tandem with USF, use these to create fibre-packed, nutritionally dense pulse-based flours. More recently, with FFE, they’ve used specially treated faba-bean flour to develop a range of novel ‘free-from’ baked goods designed to benefit human health

“For the past five years, this group has been focusing on value addition – and especially on value-added products that have proven health benefits,” Mundree says. “We’ve created protein-rich chips, breads, tart and pizza crusts that are low in allergens, gluten and fat. The range of products we’re developing is very exciting.”

The next challenge? Getting Australians to enjoy eating them.

Pulses, one of the world’s most sustainable and versatile sources of protein, are packed with fibre and essential vitamins but low in fat and allergens and low-GI, notes Mundree. The proteins they contain are high in lysine and methionine, “making them complementary to most cereal grains, which lack these amino acids”.

The dried, edible seeds of pulse crops can be incorporated into various end-user food products to boost nutritional content. Their amenability to processing further boosts pulses’ potential as ingredients for fortifying household foods.

Despite efforts to popularise the potent legumes, many Westerners say they dislike the taste or find them difficult to digest.

Paradoxically, post-pulse bloating and gassiness can be overcome… by eating pulses, Mundree contends – provided those pulses have been properly prepared.

“There’s a fundamental rule: if you’re preparing a raw pulse, say, chickpeas to make hummus, soak it overnight in water before cooking. This removes 80 per cent of the family of polysaccharides and oligosaccharides known as RPOs – whereas if you just cook and consume it, that’s going to make you very ‘gassy’. So that’s a part of it.

“Secondly, it’s about your gut microflora. Usually, the ones that produce gases are the anagens – methane-producing microflora. And these are generally not the good, ‘friendly’ ones.

“If, however, you maintain a healthy balanced diet where you’re getting enough prebiotics, you’re likely to have enough good gut microflora to absorb a lot of these gases and turn this around to produce energy.”

Another obstacle to uptake among Western consumers’ aversion to pulses’ distinctive ‘beany’ taste. “For the western palate, that ‘beany’ flavour has been a major impediment to the inclusion of pulses into food products,” Mundree says.

The next phase of the team’s project, to be conducted under the CRC’s Research Program 3, will focus on removing the ‘taste impediment’.

“AustGrain’s partner USF has developed a special extrusion technology that, at a high temperature and pressure, can potentially remove the beany flavour from many pulses,” he explains.

“Take a snack like bhuja: Australian versions of this contain only around 18 per cent chickpeas; the rest consists of other things Western palates are more accustomed to, such as rice flour.

“Removing the beany flavour from pulses means that in these health foods we’re developing, we can boost the percentage of pulse flour significantly to around 80 per cent. So we can make, say, a breakfast biscuit with 80 per cent pulse content.

”What’s the value of that? It helps deliver nutritional and health benefits.”

The next phase of the project, Mundree says, will be to conduct the clinical trials that enable FFE to make substantiated health and nutritional claims about its new pulse-fortified products.

This where other CRC research participants, such as the Australian National Phenome Centre (ANPC) at Murdoch University, UNSW’s Food Sciences division – and, potentially, The George Institute for Global Health (TGI) – come in.

“We believe, for instance, that pulses can be used as a very powerful ‘prebiotic’: basically, encouraging prebiotic growth in the gut,” says Mundree. “We have proven this in lab-based experiments but now we want to take it to human trials.

“That’s one of the things we want to do through the CRC.

“We’ll do some of the validation at Murdoch Uni, at the ANPC. QUT also has a very strong Health Faculty that looks at general health and wellness and at aged care. We hope to run some of the trials using populations they already have standing relationships with.”

Mundree thinks a two-year time line is feasible. “We need to do a proper trial that will validate these health claims, and we’ll need to track them within a period of 18 months to two years,” he says.

Proving the nutritional benefits of advanced pulses, coupled with FFE’s processing technology and the collective expertise housed at QUT and QDAF, will enable the delivery of “functional food solutions with significant commercial appeal that are backed with scientific evidence of their health benefits”, Mundree says.

“Austgrains and FFE will be able to market these products commercially with nutritional and health claims attached,” he adds.

“So whether it’s a protein shake or a breakfast biscuit, the label will be able to state, for example, ’40 per cent protein content, known prebiotic’. And the public these days are very attuned to concepts of microflora and gut health.”

Mundree sees several broader industry benefits flowing from this research; they include the expansion of regional growing areas with increased demands from domestic and export markets; the vertical integration of post-harvesting processing into the pulse value-chain; and the increased opportunities for employment that come with new markets for pulses and pulse-based products.

Then there are the health benefits to consumers of eating more pulses, which he contends are considerable.

“There are many products out there today that promise the world but honestly, don’t deliver much,” he says. These products will be different.

Eating a healthy diet with enough prebiotics – including pulses – means you’re likely to have more good gut microflora, he explains. And that in turn helps you ward off all sorts of illnesses.

“There’s enough evidence to suggest that if you maintain a healthy gut microflora – and you do that by managing what you put into your gut – you can live a very healthy life,” Mundree asserts. “If you have a healthy population of gut microflora, most illnesses, including most autoimmune diseases, can be dealt with.

“Professor Jeremy Nicholson, who heads up the ANPC and is one of, if not the foremost expert on gut microflora, would tell you exactly the same thing.”

Austgrains’ Sandeep Mohan is equally excited by the opportunities he sees as flowing from his group’s involvement with the CRC and its research partners.

“QUT continues to provide high levels of technical support in validating the nutrition profiles of flours developed by us,” Mohan says. “This support is a significant building block, supporting our efforts to develop high-nutrition pulse flours [that] can be processed into breads and other flour-based confectionery products.”

He’s optimistic that the group’s ongoing collaboration with QUT and, down the track, with ANPC scientists, will enable it to substantially expand its reach – and profits – in a previously pulse-indifferent consumer market.

“We have seen the light at the end of the development tunnel and are now moving to promote the treated pulse flours as ‘Australian new-generation’ ingredients for pulse-based foods, which will sit alongside other, more traditional foods on the supermarket aisle,“ Mohan says.