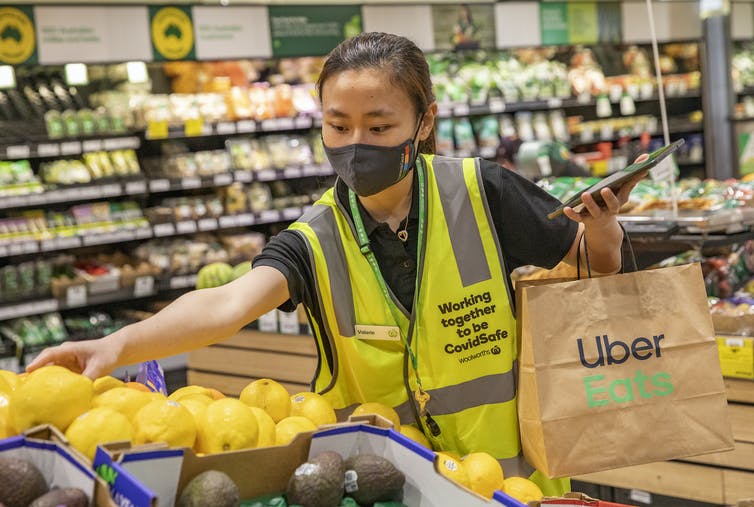 As lockdowns continue across Australia, many households are doing something they may not have considered just 18 months ago: ordering groceries online.

Australia’s supermarket duopoly, Coles and Woolworths, have raced to implement new technology and transform labour arrangements to keep up with the e-grocery boom.

Both are investing in ‘smart’ warehousing and distribution systems with various degrees of automation, as well as making extensive use of app-driven gig workers for grocery picking and delivery via platforms such as Uber and Airtasker.

My research suggests a reimagining of the Australian supermarket is currently underway. And where Coles and Woolworths go, others will follow: the pair are Australia’s largest private-sector employers, and their current moves seem likely to speed up the trend towards on-demand and precarious labour.

Teaming up with big tech

When the pandemic hit Australia in March 2020, Coles and Woolworths were quickly overwhelmed. Unprecedented demand for home delivery caused massive delays, and online services were paused for five weeks to prioritise shoppers with special needs.

Both supermarket giants have since partnered with food delivery platforms to solve the ‘last mile’ problem of home delivery using a precarious, on-demand network of delivery drivers.

In September 2021, Woolworths formalised a deal with Uber, trialled in 2020, to provide one-hour delivery from selected Metro stores in Sydney and Melbourne. Woolworths staff will pick and pack the order and hand it off to an Uber driver. These drivers, and on-demand couriers Sherpa and Drive Yello, are already delivering to thousands of Woolworths customers every week.

For Coles, partnerships with the on-demand economy predate the pandemic and have only grown more important. In 2017, Coles quietly teamed up with Airtasker, encouraging shoppers to put their grocery list up for auction and have gig workers bid each other down to win the job.

Coles also released a ‘Netflix and Chill essentials‘ range for delivery via UberEats in 2019, spanning ice cream, biscuits and other snacks. These partnerships suggest a strategy for restructuring labour relations was already under way before the pandemic.

Inside the supermarket a growing number of ‘personal shoppers’ can be found picking and packing orders for home delivery.

Some are employed by Coles or Woolworths, and they wheel around a multi-tiered workstation complete with scanner gun, measuring scales, and touch screen. Software determines the most efficient way to pick multiple orders at once and dictates the worker’s route through the store, which items to pick, what bag to put them in, and how long it should take.

Other ‘personal shopping’ is done by plain-clothed gig workers, perhaps working through Airtasker on their mobile phone, who are indistinguishable from other shoppers.

Demand for online grocery shopping has also accelerated Coles and Woolworths’ development of fully or semi-automated warehouses coordinated by ‘smart’ management systems. Both supermarkets are working with global tech companies to develop billion-dollar, state-of-the-art warehouses, with some scheduled to open as soon as next year.

With UK software and robotics company Ocado, Coles is developing two data-driven ‘customer fulfillment centres’ in Melbourne and Sydney, scheduled to open in 2022. Autonomous picking robots will retrieve items for human workers who, for now, are better able to scan goods and pack them for delivery.

The system is underpinned by the Ocado Smart Platform: end-to-end software, apps and technology to manage online grocery demand.

These are hybrid warehouse-supermarket facilities developed by US company Takeoff Technologies. They cannibalise floor space in a retail store to incorporate a small warehouse with vertical racking, automation, and picking robots. As in the Ocado model, the robots retrieve items for workers to pack and deliver.

Two of these facilities are already up and running, with the second opening this week on Queensland’s Sunshine Coast.

These are just two of the new automated systems designed to replace traditional warehouses. The closure of existing warehouses will result in the loss of thousands of (mainly unionised) jobs. It is currently unclear if retrenched workers will be redeployed to automated sites, which will still require large numbers of workers to function.

Recent research led by sociologist Tom Barnes found that when unionised warehouse workers are retrenched due to automation, they are likely to continue working in warehousing, but in more insecure arrangements and for less pay. Put simply, when unionised jobs are lost, they are not recreated elsewhere.

Online grocery shopping is promoted as an important measure for limiting contact between people and reducing the spread of COVID-19. However, this highlights the question of who gets to stay home and who continues to work, potentially putting themselves at risk.

Mapping of exposure sites across suburbs shows clear class divides between those who can work from home and order in, and those who cannot. Last year, as much as 80% of COVID-19 transmission in Victoria took place in insecure workplaces among precarious workers.

On-demand labour services require a stratified and unequal labour force, whereby some families outsource domestic labour to others. This outsourcing may provide an overall benefit, but it depends on workers who have been denied secure work or government assistance. By necessity, these people do the work deemed too risky by others.

The smart supermarket of tomorrow

Advances in technology and automation are not wiping out supermarket jobs but changing them. Fantasies of ‘lights-out’ fully automated warehouses and drone deliveries are unlikely to become reality when a growing pool of precarious workers are available to do the work.

Coles and Woolworths are not straightforwardly outsourcing labour to the on-demand economy. Instead, they are bringing multiple forms of labour into their distribution networks.

Precarious workers and the more securely employed (often members of unions) work side by side in the complex labour process of grocery home delivery. Coles and Woolworths can shift risk and responsibility onto gig workers when needed, while maintaining control of the entire distribution network. This ability to outsource risk and keep control is not a new high-tech development, but a fixture of capitalist labour relations.

Partnerships with the on-demand economy and global tech companies suggest a reimagining of the Australian supermarket is currently underway. Although the supermarket may appear fixed and banal, it is an important social institution which is always changing and being renegotiated.

What will these changes mean for Coles and Woolworths, and for the rest of us? In the absence of organised labour resistance or government intervention, the trend towards an on-demand and precarious workforce seems likely to continue.

This article was authored by Lauren Kate Kelly, PhD candidate at RMIT University. It has been republished from The Conversation under a Creative Commons license. Read the original article.

Lead image: A Woolworths ‘picker’: Both Coles and Woolworths have raced to implement new technology and change labour arrangements to keep pace with a boom in e-commerce. Credit: Woolworths, courtesy of The Conversation