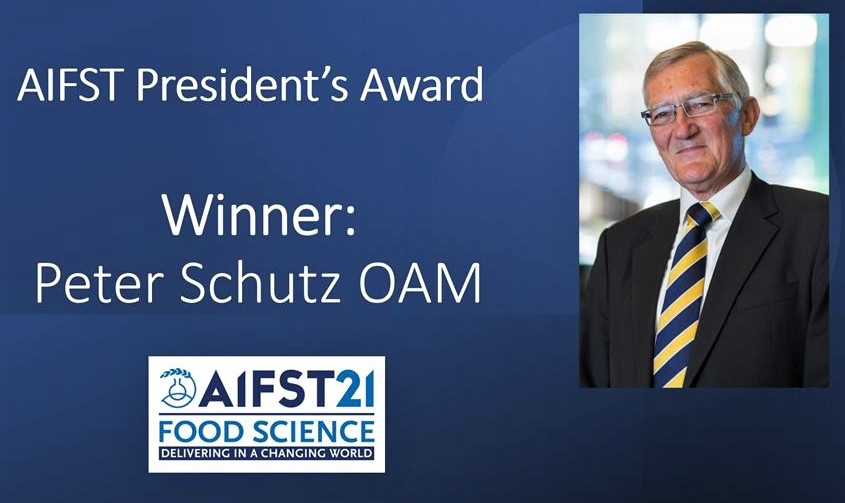 CRC Board member Peter Schutz AOM has netted the 2021 Australian Institute of Food Science & Technology (AIFST) President’s Award for his outstanding contribution to the Institute – and to the nation’s food industry.

Each year, the AIFST recognises the outstanding achievements of its members and the contribution they’ve made, not just to the Institute and its objectives but to Australia’s food sector more broadly.

The President’s Award recognises, acknowledges and acclaims the recipient’s outstanding contribution to the Institute. In Schutz’s case, this means inspirational, ongoing work in advancing the AIFST and, in turn, the nation’s food sector, benefiting its farmers, food manufacturers, retailers, exporters, consumers and economy.

As the AIFST declared following his retirement last year, Schutz is ‘a passionate advocate for the Australian food and agribusiness sector, [with] a wealth of experience and insight developed over several decades … His commitment to the AIFST and the food industry has been quietly outstanding, his big-picture, blue-sky thinking has been invaluable to many across the industry and has made a lasting impact’.

Schutz joined the Institute nearly four decades ago, in 1984, and has been a passionate advocate of its mission ever since. In 2003, he was the recipient of an AIFST Food Industry Innovation Award, acknowledging ‘a significant new development in a process, product, ingredient, equipment or packaging that has achieved successful commercial application’ in the Australian food industry. Six years later he was made an AIFST Fellow. For two years from September 2011, Schutz also chaired the Institute’s Publications and Editorial Committee.

In 2015, he netted the AIFST Keith Farrer Award of Merit. The award recognised Schutz’s key role in furthering the Institute’s aims and objectives, and acknowledged his ‘outstanding contribution to food science and technology across the areas of education, research, industry and government’.

A year later, Schutz became the Institute’s Chair and President, positions he held until 2020.

This latest accolade is a fitting tribute to an invaluable food-industry leader.

Peter Schutz OAM has more than 50 years’ experience and achievement in the food and agriculture industry. He retired as Executive Chair of Food Innovation Australia Ltd in July 2019. Prior to this role, Schutz was Group Technical Director of George Weston Foods Ltd and CEO of George Weston Technologies. He and his wife also have an active involvement in the family farm in NSW’s South West region, growing mixed cereal crops and rice.

Current Board roles include Chair of The Lupin Co, Director of Fermentation Tasmania Ltd (FermenTasmania), and Director of the Future Food Systems CRC.

Previously, Schutz served on the Boards of the Value Added Wheat CRC and Grain Foods CRC. He’s also a Fellow of the Australian Institute of Company Directors.

For more information about Peter Schutz, visit his Linked In page.

Established more than half a century ago, in 1967, the Australian Institute of Food Science and Technology is an independent body not beholden to government, industry or lobby groups. The Institute’s stated purpose is ‘to unite food-industry professionals in the science of feeding our future’. It does this via education, collaboration and recognition, inspiring its members to champion ‘a robust, innovative science-based Australian food industry to meet future food needs’.