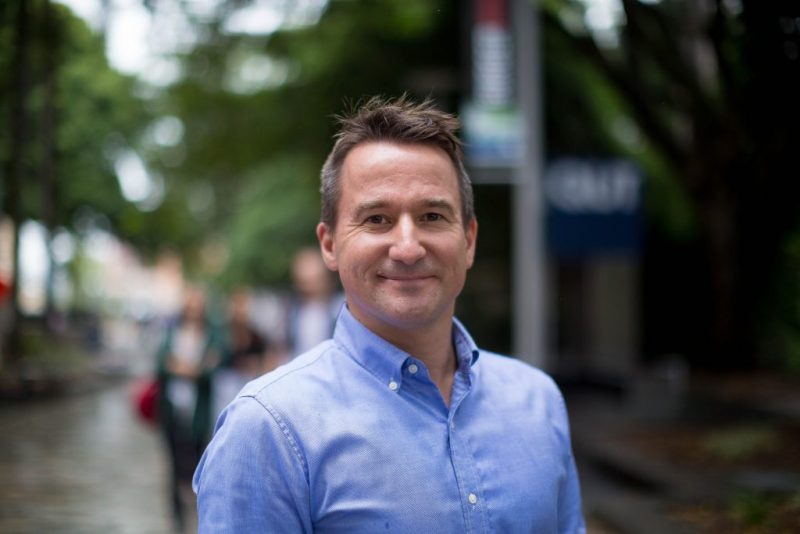 A professor of Urban Informatics within the QUT Design Lab at Queensland University of Technology’s School of Design, Marcus Foth undertakes transdisciplinary work that “brings together people, place, and technology”. Much of his research explores the cutting edge of human-computer interaction, with a focus on smart cities, community engagement, computing and sustainability. Prof. Foth leads the CRC Smart Trade Hubs research project team.

Building on undergraduate qualifications in Multimedia and Computer Science in Australia and Germany, Marcus Foth followed up with a PhD at QUT, an ARC Australian Postdoctoral Fellowship and a year as a Visiting Fellow at Oxford University’s Oxford Internet Institute.

Foth spent 2013 as a Visiting Professor at Beijing’s Tsinghua University and Professor in Residence at Finland’s University of Oulu. On his return to Queensland in 2014, he was promoted to full professor of Urban Informatics at QUT, adding the title of Research Leader (Design) a year later.

Prof. Foth was the Founding Director of the QUT Design Lab, established in 2016 as part of the university’s Creative Industries Faculty. For the past five years, he has also been an Honorary Professor in the School of Communication and Culture at Aarhus University, Denmark.

Over a stellar academic career to date, Professor Foth has garnered more than $8 million in national competitive grants and industry funding, including a string of ARC Linkage and Discovery grants; several CRC-funded projects; and numerous government and community consultancies and industry collaborations.

In 2011, planning, design and development site Planetizen inducted him into the world’s top 25 leading thinkers and innovators in the field of urban planning and technology. Two years later, he was the recipient of a Queensland Young Tall Poppy Science Award.

In 2017, the Australian Computer Society (ACS) made him an ACS Fellow. At the time, the Society commended him for his “sustained and distinguished contribution to the field of computer science”. It stated: “Foth is the international thought leader who coined the term urban informatics – now adopted by universities and industry worldwide. Foth’s work makes clear how academic research can successfully respond to societal challenges.”

Last year, the ‘Blockchain for smart trade’ project he led establishing a proof of concept for a smart digital trading platform, developed for premium beef exported to China with industry partner Beefledger under the CRC, was recognised in two categories at the annual Good Design Australia Awards – one of the world’s oldest and most prestigious international design award contests. The Beefledger-QUT project took out the 2020 Design Award for Commercial services, while the project’s community engagement component won the Design strategy category.

Prof. Foth has authored or co-authored more than 200 peer-reviewed publications. On Google Scholar he has an h index of 49, with 8,000+ total citations.

In 2006 – well before the term ‘smart cities’ became commonplace – Foth founded the Urban Informatics Research Lab at QUT. He and his team pioneered the field of urban informatics, examining ways in which people create and use information and communications technology and data in urban environments.

With the Open Data Institute Queensland, Professor Foth brought the international Open and Agile Smart Cities (OASC) network to Australia In 2015. His goal was to implement open standards and create an open ‘smart city market’ based on the needs of cities and communities.

Within this context, Prof. Foth has been focusing in recent years on the mix of physical and digital, exploring what he refers to as the ‘smart community’ space: how people actually use data, and the role data can play in providing solutions to social and sustainability issues in urban environments.

“What I think I’m most excited about is the opportunity… to shift from that ‘data push’ to a ‘data pull’ approach, where people can start actually engaging with data on their own terms,” he says.

Through the Data Care initiative, which “describes a much more value-driven approach towards city analytics”, Prof. Foth is showing the importance human values play in helping to create liveable smart cities – including values such as “access, in the sense of inclusivity and participation”, he explains.

Data Care, the initiative’s Mission statement declares, ‘care[s] about enhancing privacy without removing the usefulness of data connections; improving the autonomy of citizens to have real choices about how their data are used; and making smart cities more liveable, sustainable and equitable… It is important for city administrators’ social licence to operate’.

“If we consider how Aboriginal and Torres Strait Islanders of Australia, would have lived here in Australia on their traditional lands, then you would come across things that we hear about in acknowledgement of country, which is care for country and stewardship, and being very much connected to place,” he says.

“Those notions are really, really useful in order for us to approach a much more genuine commitment to sustainability – not just this kind of Western greenwashing notion, but actually switching from a linear thinking model to what I’d call a ‘relational thinking’ model.”

“The Indigenous peoples of Australia… lived and continuously occupied and survived and cared for this country for 65,000 years. Well, there’s your smart community, right there.”

Prof. Foth’s work on urban development projects has shown him the importance of good governance models in creating smart cities and smart communities.

He and his colleagues at the QUT Design Lab have been employing speculative design methods and relational models to enable governments to anticipate policy design responses to new technologies.

And it seems the work is paying off: government is beginning to recognise the importance of a holistic sustainability approach, Prof. Foth says.

Going forward, he believes that urban planners – indeed, planners at all levels of government – will need to consider both technology and people to effectively tackle the big challenges: combating climate change; implementing sustainable systems based on ‘circular economy’ principles; and bolstering supply-chain resilience in uncertain times.

“I feel there’s an urgency – because time is ticking – that we really need to accelerate our progress towards something that isn’t just about little efficiency gains here and there, but something that is more of a game-changer in the way that we approach sustainability in cities,” he says.

Wombat populations across South-Eastern Australia are being ravaged by sarcoptic mange, a painful, often fatal condition caused by a mite and made worse by human-induced environmental stressors. Supporting Sleepy Burrows Wombat Sanctuary’s work treating mange-affected wombats, the QUT Design Lab designed and evaluated the first ‘hospital burrow’ prototype, preparing for its larger-scale deployment across Australia. The burrow is designed to simulate natural conditions while enabling easy observation and treatment.

Prof. Foth is also concerned about dwindling bee populations worldwide and is part of a global effort to design better beehives to protect these prolific and valuable pollinators.

Combine a bee-friendly hive design with inexpensive networked sensor set-up and you have a ‘smart hive’ that can be managed remotely, minimising disturbance to the bees and lessening the likelihood of introducing diseases.

The multi-stage Smart Trade Hubs initiative, an industry-research collaboration ongoing under the CRC, has highlighted the difference between security and privacy, and the importance of data sovereignty.

Prof. Foth is also the research lead on Stage 2 of the Smart Trade Hubs program. In this project, the team is modifying the platform to cater for trade in high-value fruit, wine and artisanal liquor to various export markets across ASEAN and beyond, working with new CRC industry participant Smart Trade Networks.