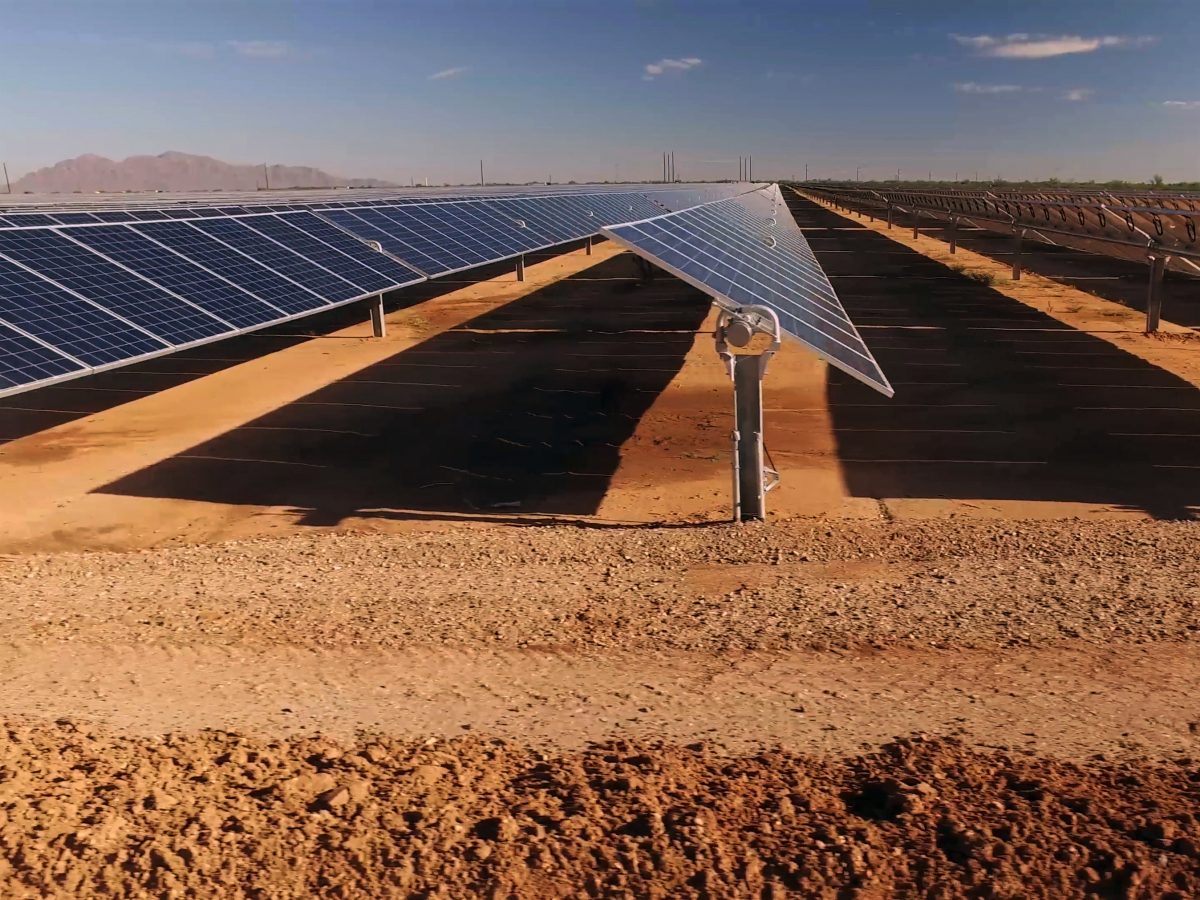 Deserts are spacious, relatively flat, rich in silicon – the raw material for the semiconductors from which solar cells are made — and never short of sunlight. In fact, the 10 largest solar plants around the world are all located in deserts or dry regions.

Researchers imagine it might be possible to transform the world’s largest desert, the Sahara, into a giant solar farm, capable of meeting four times the world’s current energy demand. Blueprints have been drawn up for projects in Tunisia and Morocco that would supply electricity for millions of households in Europe.

While the black surfaces of solar panels absorb most of the sunlight that reaches them, only a fraction (around 15%) of that incoming energy gets converted to electricity. The rest is returned to the environment as heat. The panels are usually much darker than the ground they cover, so a vast expanse of solar cells will absorb a lot of additional energy and emit it as heat, affecting the climate.

If these effects were only local, they might not matter in a sparsely populated and barren desert. But the scale of the installations that would be needed to make a dent in the world’s fossil energy demand would be vast, covering thousands of square kilometres. Heat re-emitted from an area this size will be redistributed by the flow of air in the atmosphere, having regional and even global effects on the climate.

A 2018 study used a climate model to simulate the effects of lower albedo on the land surface of deserts caused by installing massive solar farms. Albedo is a measure of how well surfaces reflect sunlight. Sand, for example, is much more reflective than a solar panel and so has a higher albedo.

The model revealed that when the size of the solar farm reaches 20% of the total area of the Sahara, it triggers a feedback loop. Heat emitted by the darker solar panels (compared to the highly reflective desert soil) creates a steep temperature difference between the land and the surrounding oceans that ultimately lowers surface air pressure and causes moist air to rise and condense into raindrops. With more monsoon rainfall, plants grow and the desert reflects less of the sun’s energy, since vegetation absorbs light better than sand and soil. With more plants present, more water is

This scenario might seem fanciful, but studies suggest that a similar feedback loop kept much of the Sahara green during the African Humid Period, which only ended 5,000 years ago.

So, a giant solar farm could generate ample energy to meet global demand and simultaneously turn one of the most hostile environments on Earth into a habitable oasis. Sounds perfect, right?

Not quite. In a recent study, we used an advanced Earth system model to closely examine how Saharan solar farms interact with the climate. Our model takes into account the complex feedbacks between the interacting spheres of the world’s climate – the atmosphere, the ocean and the land and its ecosystems. It showed there could be unintended effects in remote parts of the land and ocean that offset any regional benefits over the Sahara itself.

Drought in the Amazon, cyclones in Vietnam

Covering 20% of the Sahara with solar farms raises local temperatures in the desert by 1.5°C according to our model. At 50% coverage, the temperature increase is 2.5°C. This warming is eventually spread around the globe by atmosphere and ocean movement, raising the world’s average temperature by 0.16°C for 20% coverage, and 0.39°C for 50% coverage. The global temperature shift is not uniform though – the polar regions would warm more than the tropics, increasing sea ice loss in the Arctic. This could further accelerate warming, as melting sea ice exposes dark water which absorbs much more solar energy.

This massive new heat source in the Sahara reorganises global air and ocean circulation, affecting precipitation patterns around the world. The narrow band of heavy rainfall in the tropics, which accounts for more than 30% of global precipitation and supports the rainforests of the Amazon and Congo Basin, shifts northward in our simulations. For the Amazon region, this causes droughts as less moisture arrives from the ocean. Roughly the same amount of additional rainfall that falls over the Sahara due to the surface-darkening effects of solar panels is lost from the Amazon. The model also predicts more frequent tropical cyclones hitting North American and East Asian coasts.

Some important processes are still missing from our model, such as dust blown from large deserts. Saharan dust, carried on the wind, is a vital source of nutrients for the Amazon and the Atlantic Ocean. So a greener Sahara could have an even bigger global effect than our simulations suggested.

We are only beginning to understand the potential consequences of establishing massive solar farms in the world’s deserts. Solutions like this may help society transition from fossil energy, but Earth system studies like ours underscore the importance of considering the numerous coupled responses of the atmosphere, oceans and land surface when examining their benefits and risks.

This article was co-authored by Professor Benjamin Smith, Director of Research at Western Sydney University’s Hawkesbury Institute for the Environment, and Zhengyao Lu, Researcher in Physical Geography at Sweden’s Lund University.

Should we turn the Sahara Desert into a huge solar farm?