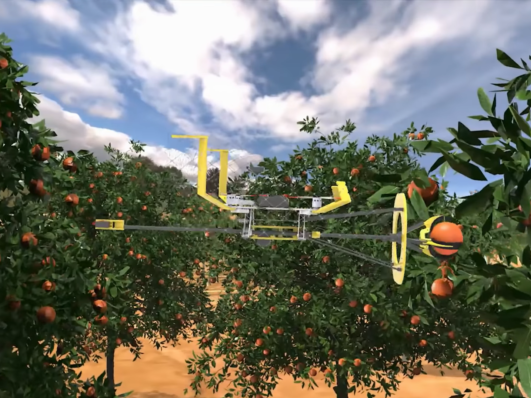 Tevel CEO and founder Yaniv Maor, a computer and systems engineer, conceived the idea for the firm’s harvest bots around a decade ago, claims a story in Jewish Business News.

According to the story, Maor saw a TV news report about Israel’s agricultural labour shortage. At the time, the technology was not sufficiently advanced to enable his vision but a few years ago, that changed when Maor, pondering on cost-effective solutions, thought, Why not have flying robots?

He began designing and building harvest drones, trialling them on his own backyard orange trees, founding Tevel – a start-up he named after his daughter – in October 2016.

He’s reluctant to put a price tag on the company’s new automated harvesting technology, but claims an impressive ROI of three weeks.

Autonomous platforms, each a hub for up to half a dozen harvesting drones, negotiate orchards according to a pre-set harvesting plan, loaded into its ‘command and control’ software. Each platform powers and controls multiple quadcopter drones connected to it via a central cable.

Each drone is equipped with a soft-touch gripper and various ‘neural networks’. These detect the fruit, aggregating data from different angles on its precise position and quality.

They target each tree in turn, calculating key attributes of foliage and fruit, ripeness, and the manoeuvring required to reach, securely grasp and ‘harvest’ each individual fruit by pulling or cutting it, then place it in the platform’s provided container – which is emptied and replaced automatically once full.

Tevel’s literature states that its bots have ‘six degrees of freedom’ compared with competitors’ three, meaning they’re capable to picking more than 90 per cent of the crop from orchard trees.

The platforms and robotics can support the harvest of several different types of fruit, from trees of varying limb thickness and fragility.

And as the drones are able to pick fruit from up to five metres above-ground, employing them means farmers can grow their trees 20 per cent higher and harvest fruit even from the highest branches, thus reaping higher yields from the same number of trees.

Source: Israeli start-up Tevel claims to be creating by far the best fruit pickers in the world
I Future Farming