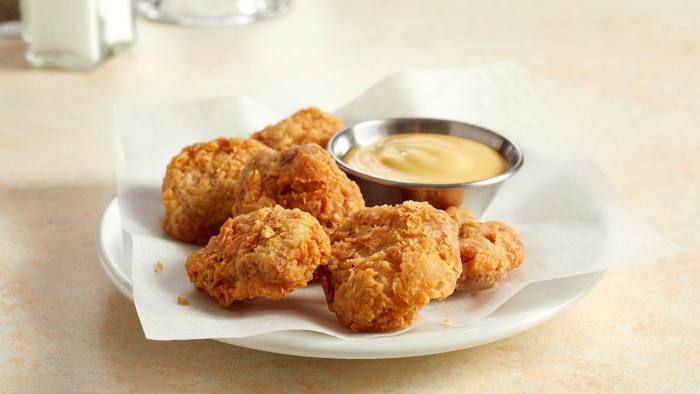 Cell-cultured chicken nuggets: soon on the menu at Singaporean eateries

In a major win for Eat Just – and for the lab-grown meat industry generally – the Singapore Food Authority (SFA) has confirmed that the firm’s cell-cultured chicken meat meets the island nation’s food-safety standards.

Eat Just’s cultured chicken pieces will be used as an ingredient in fried ‘chicken nuggets’ for sale as a premium specialty in high-end Singaporean eateries. Eat Just also has plans to develop cultured-chicken fillets.

This cultured chicken doesn’t come cheaply; in 2019, the company guesstimated, each piece could cost a customer as much as $50, meaning that it will probably remain a ‘super-premium’ product for at least the first few years.

SFA regulatory approval for Eat Just’s cultured chicken meat was granted after an extensive safety review of the ‘novel food’.

According to Eat Just, the firm’s team of scientists, product developers and regulatory experts provided extensive documentation on its cultured chicken and the propriety process used to produce it, and demonstrated the consistency of its manufacturing by making more than 20 production runs in its 1,200-litre bioreactors.

Testing showed that Eat Just’s harvested cultured chicken met Singapore’s safety and quality standards for poultry meat, with exceptionally low and significantly cleaner microbiological content than conventionally raised chicken, and that no antibiotics were used in its production.

Eat Just’s cultured chicken was confirmed to be nutritious, and safe for human consumption by an external panel of scientific authorities in Singapore and the United States with expertise in medicine, toxicology, allergenicity, cell biology and food safety.

Manufacturing cultured meats – and other alt-proteins – in Singapore

Josh Tetrick, co-founder and CEO of Eat Just, said he’d chosen Singapore as the launchpad for the firm’s first cultured chicken product because of its support for food technology.

“Singapore has long been a leader in innovation of all kinds, from information technology to biologics to now leading the world in building a healthier, safer food system,” he said.

Eat Just has teamed with Singaporean manufacturers to formulate the final product. The cultured chicken meat will be ‘grown’ initially in a 1,200-litre bioreactor that can produce enough to supply a handful of restaurants.

Initially, it will use a growth medium that includes foetal bovine serum (extracted from cattle foetuses), mixed with mung-bean-based plant protein and breadcrumbs to form the final product.

According to Eat Just, it will replace the bovine starter with a 100 per cent plant-derived serum in its next production line –not included in the SFA review simply because it wasn’t ready when the testing process started two years ago. This will reduce the price considerably, Tetrick told the US’s Food Dive.

Some industry observers, such as Cambridge, UK-based emerging-tech research/consultancy group IDTechEx, have questioned whether the bioreactors used by Eat Just will be sufficiently large to enable commercial-scale production, noted a recent story in Farm Online.

In that story, IDTechEx contended that manufacturing economically viable cultured meat ‘may require bioreactors dozens of times larger than currently exist’, and that ‘serum alternatives to bovine-sourced growth mediums were also expensive [albeit dropping, Tetrick asserts] and a major contributor to production costs’.

Singapore is the first country in the world to approve any form of cell-cultured meat for commercial sale.

Regulatory approval for cell-cultured meat is in line with the island state’s plan to become 30 per cent self-sufficient in food production by 2030 (currently, it imports 95 per cent of what its citizens eat) – in part by developing microbial protein production and cultured meat.

It is expected that Singapore’s cultured-meat testing standards, adopted to evaluate Eat Just’s products, will prove useful to other regulators and may help persuade other nations of the safety – and superior environmental credentials – of cultured meat.

“I’m sure that our regulatory approval for cultured meat will be the first of many in Singapore and in countries around the globe,” Tetrick said.